Here’s the second instalment of 2012 predictions from the Techmarketview team, this time from Georgina O’Toole and Tola Sargeant with a focus on the public sector tea leaves. My education-speak translation comments are in blue… 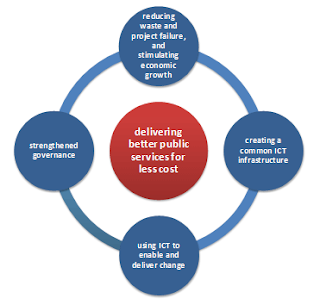 If you haven’t read the UK’s Government ICT Strategy then I can summarise it for you in a familiar phrase: “More for less.” The diagram to the left here represents the core themes. It’s the Government’s deep seated belief that technology can and will drive enormous efficiency and that a leaner public sector is one of the foundations of economic recovery. Whether or not you agree, their strategy is built upon this thesis and education leaders would do well to understand the big picture because the “common ICT infrastructure” is something that they will need to factor into their plans. The lack of a CIO at the helm is acting as a brake at the moment but expect the process to accelerate in 2012.

2. A peak in renewals will result in radical contract restructuring: 2012 is the start of two years in which we will see a peak in the number of contracts coming to their natural conclusion. Contracts will be radically restructured on renewal as UK Government moves from a vertically-siloed model to a horizontal model.

In part, this refers to the “common ICT infrastructure” and in part, the procurement strategy. The phrase  “horizontal model” refers to a more joined-up (across sectors) approach to technology procurement that  benefits from increased aggregation and improved competition. The common ICT infrastructure is part of the mechanism by which this can be achieved, i.e. standardisation. Again the key for education is awareness and planning. Cloud technology is an important element of the approach to scaling and standardisation and education leaders would reap rewards from understanding the direction of travel.

3. Megaplayers will retain lion’s share of major contract renewals: Leading suppliers have worked hard to support the UK Government ICT strategy and many have ‘come off the naughty step’. In times of austerity, and a propensity for low-risk options, organisations will stick with ‘the devil they know’ if there is sound reason to do so. Suppliers will likely find their wallet share from existing clients eroded but will have the opportunity to broaden their client base by offering successfully implemented horizontal solutions to a wider range of organisations.

In summary, big players like Capita have allowed the Government to renegotiate contract terms in recognition of the difficult economic climate. In return for playing ball with the Government, they will likely be treated as favoured partners and retain big contracts. I think there is truth in this statement but I’d also point out that “megaplayers” tend to be a little slow on the uptake and that significant shifts in the ICT landscape offer opportunities for more agile players to grab market share. Taken in tandem with the trend for consumerisation of enterprise IT, I think we’ll see the emergence of new names offering great value to education customers. As a general observation, if you’re an education customer taking services under contract from a company, now is a good time to negotiate better terms. It’s a buyers’ market.

This is all about efficiency. Aggregation drives efficiency and a shared service is a way of creating that aggregation. For example, if all the schools in an Authority choose to procure payroll services in one block, that drives down the cost-base for the service provider and means a keener price for schools. Over time the market for shared services will shake down to a “handful of hosting organisations” because the more aggregation, the lower the cost-base (up to a point). In my opinion, education leaders could save their organisations very large sums of money by collaborating with organisations with similar needs to procure shared services. It still amazes me how many education organisations run themselves as islands, trying to do everything in-house. It is not only expensive but it is a distraction from their core function: learning.

5. SMEs will establish beachhead in government shared services: SMEs  [Small and Medium size Enterprises] will have more opportunities as contracts are broken down, particularly where niche requirements, for example, security, are separated out and procured separately. The most successful suppliers will be those that focus on being best of breed in one or a handful of niche service lines that can be shared horizontally across multiple organisations.

This final point is linking together two of the previous ones, i.e. (4) shared services and (2) contract re-structuring. Successful suppliers are ones that add the most value for the lowest cost. Given that aggregation is one of the keys to efficiency, SMEs that focus in on elements of the technology where they not only add more value, but also leverage scale by offering that value horizontally across a variety of sectors, will find opportunities emerging as contracts come up for renewal and the Government’s “horizontal” strategy bites. If you are an education leader, my advice would be to analyse the way in which your organisation conducts its business (and business of education) functions. Use this analysis to work out whether you’re really better off doing everything in-house. A useful concept in this context is ‘opportunity cost’. This may be defined as “the cost of any activity measured in terms of the value of the best alternative that is not chosen.” For example, you may choose to manage your technology in-house because it is 15% cheaper than a managed service delivered by a 3rd party as measured in pounds/dollars. However the opportunity cost of not choosing a managed service is that you may find you/your staff are 25% more tied up in technology-related issues with a knock-on degradation in learning outcomes. This is just one scenario but one I have come across similar ones on a regular basis. Technology can be a distraction and my advice if you are an organisation in the business of education, is to shed distractions and focus, focus, focus on your core business: learning.